Assiniboine graduates get jobs, remain in the province

The overwhelming majority of recent Assiniboine Community College graduates are living and working in Manitoba, according to the college’s annual graduate follow-up survey results.

The 2022 survey shows that 94 per cent of graduates have jobs within nine months of graduation, with 89 per cent working in a career related to their field of study.

“This survey is one of the key measures of accountability for the college. Transforming lives and strengthening Manitoba extends far beyond the time that students spend with us,” said Mark Frison, President at Assiniboine. “It means ensuring that their experience here supports them as they launch their careers, and that they feel motivated to do this in the province where they received their training.”

“A key piece of our province’s Skills, Talent and Knowledge Strategy is to see Manitobans succeeding in their careers, and strengthening their communities,” said Jon Reyes, Minister of Advanced Education, Skills and Immigration.

“When we see results from Assiniboine graduates that indicate just that, we can be confident we’re heading in the right direction. We’re proud to work with ACC to ensure that both Manitobans and the provincial economy are set for success.”

Our most recent graduates, nine months after graduation are making an average of $46,800, significantly exceeding the average income of Canadian college diploma grads after two years, which is $38,200 according to the National Graduates Survey [The State of Post Secondary Education in Canada 2022 (Usher, 2022)].

“Assiniboine graduates are faring well compared to national averages,” said Dr. Deanna Rexe, VP Academic at Assiniboine. “In addition to the strong start, they progress quickly in the early years of their careers.”

Nine out of 10 graduates would recommend Assiniboine to a friend or family member.

The survey was conducted in spring 2022 by Insightrix Research. 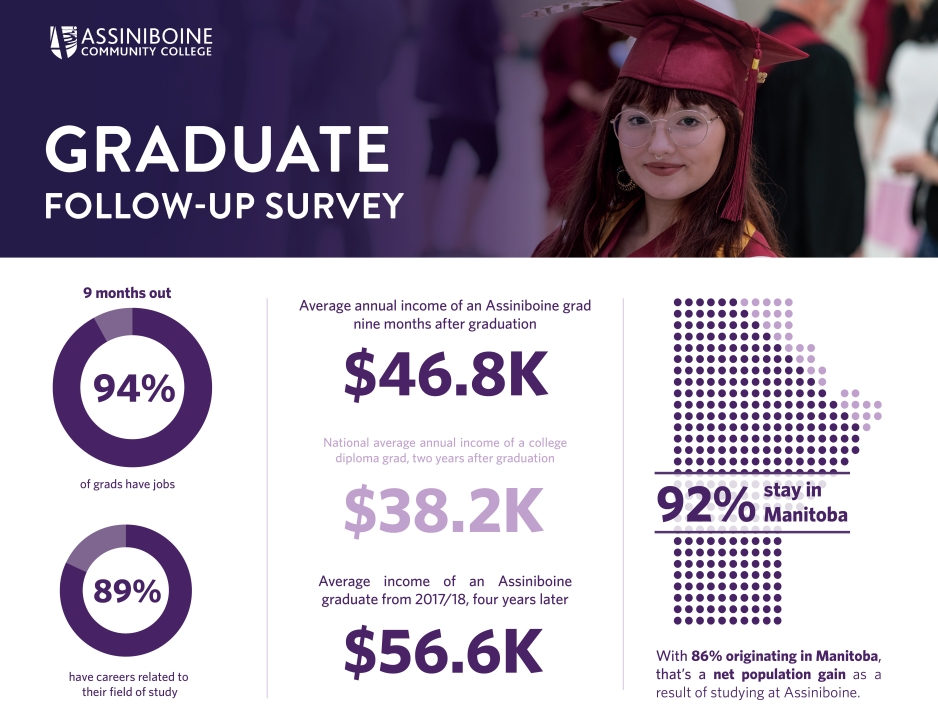 Assiniboine Community College has named a student space in the Len Evans Centre for Trades and Technology at the college’s North Hill campus, “Mazergroup Main Street”, to honour a $500,000 donation... END_OF_DOCUMENT_TOKEN_TO_BE_REPLACED

Assiniboine Community College is offering the Early Childhood Education (ECE) Workplace program in two new locations in early 2023. The diploma program is intended for those who are currently employed... END_OF_DOCUMENT_TOKEN_TO_BE_REPLACED