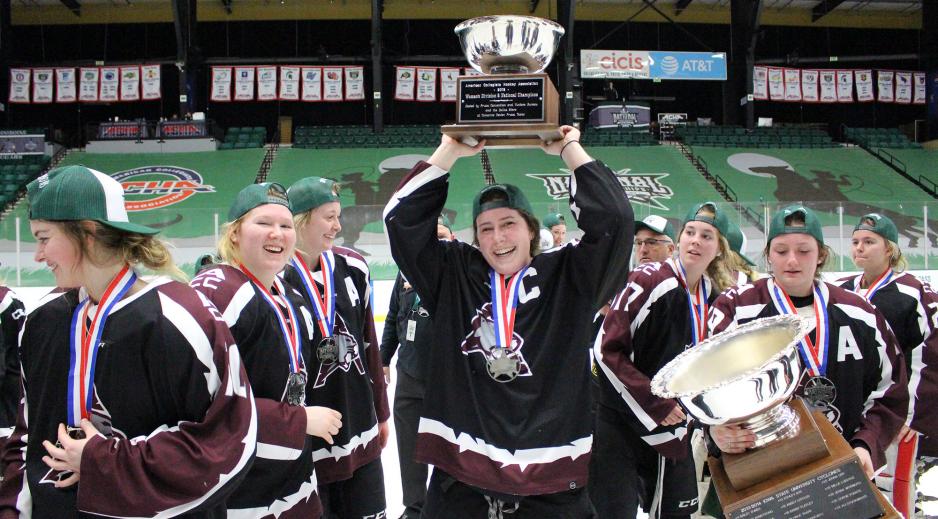 The Assiniboine Cougars are the 2019 ACHA Division 2 National Champions! The Cougars took on Minot State in the finals on Sunday and finished with a 1-0 win.

The Cougars spent most of the final game clinging to a slim lead against their opponents from the Minot State University Beavers, a team highly favoured to win but hindered by numerous penalties.

The Cougars have been a Cinderella story at the tournament and that theme continued in this final. The team was eliminated early in their first ACHA Championship appearance last year in Columbus, Ohio. A loss in their first game made it statistically impossible to advance.

The Cougars were defeated in six previous games against the Beavers last season, the team ranked first in the ACHA Western Region. As the final game unfolded, the Beavers seemed to lack the confidence and speed for which they’d been known. The Beavers were never able to recover from a first-period goal by Simone Turner-Cummer and ended up narrowly losing 1-0.

There were times after puck-drop when Minot showed some of its old flair, including a quick shot twelve minutes into the game that just missed the net. The problem came with Minot’s frequent trips to the bench. A call for roughing at 10:14 sent a Beaver player to the bench for 2 minutes. Another call for an illegal bodycheck at 13:39 once again put Assiniboine on the power play.

That’s where Simone Turner-Cummer slipped one past the Beavers goalie. Cougars’ captain Mariah McCue picked up the assist. The play became more physical in the second with several players taking hard drives into the boards. Cougars’ Sam Christensen went to the bench at 10:14 of the second but the Beavers couldn’t defeat Assiniboine’s excellent penalty killers.

Minot was back in the penalty bench for tripping at 13:45. Assiniboine didn’t score but the penalty ate up precious time needed for a Minot comeback. The Beavers’ failure to keep out of the box became a serious problem in the third.

Minot’s journey to the box began with a tripping call at 9:48. The team then took a hooking penalty at 16:22 and an illegal cross-check at 17:39. Combined, these two briefly gave the Cougars a 5 on 3. Even a late Cougars’ penalty at 18:20 (against Haylee Andersen for tripping merely returned the Cougars to an ordinary 5-4 Power Play for almost the remainder of the game.

Minot seemed stunned by the result and the energized Cougars’ defence kept the Beavers from posing any serious threat in the dying minutes of the game.

Among the less celebrated parts of the Cougars victory was the strength of goalie Marley Quesnel. From puck drop to final buzzer, Quesnel was steady, agile and almost technically perfect with only one exception midway through the first when a fumbled puck almost leaked past.

At the buzzer, the scene on the ice was pandemonium. Cougars’ players embraced one another, some overcome with tears and expressions of astonishment at what the team had accomplished.

Coaches and officials joined the players and following the game, tributes poured in on social media, including from former NHL player Sheldon Kennedy, from the Brandon Wheat Kings WHL team, and from the Brandon University Bobcats.

The team lands in Winnipeg on Monday when they’re scheduled for a formal visit with the premier, Brian Pallister, at the Manitoba Legislature.

If you missed yesterday's game (where were you!), you can catch some of the highlights below. Join host Tyler Crivea with the Interactive Media Arts program with a recap of the Cougar's win.

From Rio to the Wheat City, Pinto Joins Cougars Soccer

Paulo Vitor Costa Pinto is the second international student athlete recruited to the 2022 Cougar men’s soccer roster. Pinto is a 5’9 midfielder from Rio De Janeiro, Brazil. Like many Brazilians, he... END_OF_DOCUMENT_TOKEN_TO_BE_REPLACED

Now, perhaps more than ever, our world needs skilled health care providers, those willing and able to provide care, compassion and support to individuals when they need it most. If you’re looking for... END_OF_DOCUMENT_TOKEN_TO_BE_REPLACED

Interested in Cougars merch before season starts!? Below you will find a link to our local Brandon Source for Sports and the clothing online store they are holding for Cougars Athletics. We know... END_OF_DOCUMENT_TOKEN_TO_BE_REPLACED