Not every first-year Business Administration student gets driven to one of their first classes by Mark Frison, president of Assiniboine Community College. Moar was Frison’s guest on Collegians in Cars Getting Coffee, a YouTube series in which the college president buys the student a coffee and drives him or her to class.

Bryden Moar graduated as a mature student at Assiniboine’s Adult Collegiate last spring. As a student representative on student council, he helped initiate a Safe Walk program to see students safely to their cars after evening classes. As founder of the Social Justice Club, he worked with other students to raise money for people in developing countries; a highlight activity for the club was participating in We Day.

Moar worked as a lumberjack in The Pas, Man., when he was younger.

“Many days of going out before dawn and coming home after midnight. Slapping down 20 or 30 cords in a day with the skidder and everything. It was beautiful, right? Out in nature, all day long. And believe it or not, it was a darn good way to stay warm in the wintertime,” Moar recalled.

After moving to Dauphin and working in construction jobs, Moar enrolled in Assiniboine’s Parkland campus in 2013 and completed the coursework to graduate from high school on Dec. 21.

Only 10 days later, as he was celebrating New Year’s Eve in Camperville, Man., an accident occurred, which landed Moar in hospital on a long road to recovery.

“Two hundred and five days in the hospital, and I walked out on my own two stumps. It taught me a lot about patience, that’s for sure. And it lit a fire inside of me,” Moar said.

“And is that part of what inspired you to keep going in school?” Frison asked.

“Yes. I was always a worker. From high school, right till the accident, never longer than two or three months without a job. A go-getter. Always, always put myself out there. And strove for the best I could with what I had,” Moar replied.

Moar provided additional details of what happened to him in a separate interview and email.

“That night, I was asked numerous times to drive, after I had starting indulging in some adult beverages. People were angry because I would not drive intoxicated, so I started to walk home to my in-laws,” he wrote in the email.

The combination of alcohol and fresh air caused Moar to lose consciousness on the walk home.

“When I came to, I was in the middle of a frozen lagoon. Dazed and confused, I looked around to see where I was.”

He tried to stand up, but couldn’t. He began crawling towards the nearest light, but despite his many years of experience working outdoors in northern Manitoba, he was not wearing winter gloves that night.

A chicken-wire fence halted his progress. He couldn’t climb over it, because his fingers and legs were already frozen.

Moar started yelling. He heard snowmobiles starting up in the distance, heading in his direction, buzzing around him.

“As I lay there listening, saying my goodbyes, they started to stop. I could tell they were gathering close. Then silence. Not a snow machine to be heard. With all my strength, I sat upright in the tall grass and screamed my location as best I could.”

Soon after, he heard the words he’ll never forget: “We found him. We got you, man. You’re going to be all right.”

Moar insisted on attending his high school graduation at Parkland, using a walker, at which Frison awarded him his diploma. He enrolled at the college’s Adult Collegiate last year to upgrade some of his courses to prepare for college.

Through it all, Moar has kept his sense of humour.

“That’s the story of Iceman,” he signed off his email, using the handle his friend, Clarence Houle, gave him on social media. Moar dubbed Houle “Inferno” for surviving a house fire that left him badly burned.

On his car ride with Frison, Moar said he likes his coffee hot.

“I don’t know how people could stomach iced coffee. I tried it and it’s just not for me. One of those things. Like sign language,” he said, holding up his hands. “Not for me now.”

What is for him now is “hitting the books” in the two-year Business Administration program, with a likely specialization in entrepreneurship. After that, he plans on completing the one-year horticulture program.

Moar aims to combine that learning into an entrepreneurial approach to food production, especially in northern communities. He’d like to grow vegetables and greens in greenhouses and use a “self-sustaining bass fishery hydroponic” to produce fresh fish.

To take notes in class, his sponsor – the Society for Manitobans with Disabilities – has provided Moar with a Livescribe pen, which records class lectures and discussions, and the college provided a laptop with a talk-to-text program.

When he’s not studying, Moar is sometimes “dance-king,” a combination of dance and walking that helps him keep his weight down.

It’s fun. I go out. I walk. I dance. I brighten my day up. I get some exercise. People don’t realize, but I’m brightening up their day, too. Even if they snicker at me, I just made them giggle a little bit. I’ve added a little bit of sunshine to their life.

His advice to others:

“Don’t ever be afraid to fail. And if you fail, fail forward. Fail often. We learn from our failures.”

Watch Bryden's appearance in episode 3 of Collegians in Cars Getting Coffee below:

Emmalie Thompson will compete for both the Cougars’ women’s soccer and hockey teams this fall. Hailing from Sainte Rose du Lac, Manitoba, Emmalie Thompson is the only recruit to come from the U18... END_OF_DOCUMENT_TOKEN_TO_BE_REPLACED 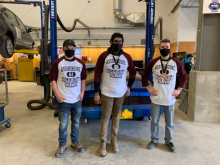