When Amber Brightnose shared some of her Indigenous culture with her non-Indigenous classmates, they were eager to learn more.

“There are lots of cultures in Brandon. When we started talking about each culture that we came from and what we did as children, I was able to explain that I went hunting, fishing, berry-picking and all those types of things. We would gather our food and then have a meal as a family. And everyone’s like, ‘You guys actually did that kind of thing?’” Brightnose said.

All her classmates in Early Childhood Education at Assiniboine Community College engaged in smudging, a traditional ceremony using the smoke of some plants for spiritual cleansing, and sharing circles.

“We would smudge in the classroom and then we would share our feelings in the sharing circle. I felt it was very positive. A lot of my non-Indigenous classmates requested sharing circles.”

A talking stick is handed around the sharing circle, so that each person can take a turn speaking.

“If I was having a problem, with anything, nobody could jump in and interrupt me, by saying, maybe you should do this, or maybe you should try this. I could get it all out, all at once. Then, once I was finished, I’d hand the stick off. It would continue until we had gone around the whole circle.”

“I used the Cultural Centre all the time for studying and just relaxing. I used to go there and smudge with Cecil. I used to talk with Cecil all the time, because Cecil was my go-to elder,” Brightnose said.

I had to leave my home community and come to another community. Cecil explained how he left his home community, too. He had a lot of the same experiences, so he’s able to help you adjust to your new experiences.

When Brightnose was growing up, she told her mother that she wanted to work with children. This ultimately led to her working at the Cranberry Portage child care centre in The Pas.

The director there encouraged Brightnose to “spread her wings” by going to Assiniboine for an education, including exposure to the different types of centres that Brandon has for practicums.

While open to staff and children from all cultures, Kokum’s includes smudging and other Indigenous cultural practices in its activities.

Students learn drumming and how to build a teepee from elders invited into the centre. But mostly, they set the agenda through expressing their own interests.

When some students pretended to be dinosaurs, Brightnose used it as a springboard to build a curriculum around imagining the giant footprints and sharp teeth of the prehistoric reptiles.

“I love my job” as a lead teacher, working with an assistant to make sure the children’s activities are well-planned and executed, she said.

Brightnose has straightforward advice for anyone thinking about attending Assiniboine.

“I would say come. You don’t sit there and look at a piece of paper and say, oh yeah, I know how to change a child’s behaviour. You learn it by doing.” 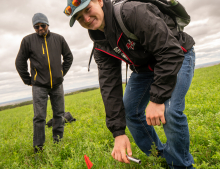 Mid-Plains Implements has contributed $50,000 to Assiniboine’s campaign to expand agricultural training at the college. The campaign to build the Prairie Innovation Centre aims to support the demand... END_OF_DOCUMENT_TOKEN_TO_BE_REPLACED

Assiniboine Community College is proud to announce their continued partnership with Conestoga College (Ontario) to deliver another tuition-free welding program at its North Hill Campus in Brandon... END_OF_DOCUMENT_TOKEN_TO_BE_REPLACED

Throughout the month of February we will be celebrating the accomplishments and contributions of Black Canadians as they relate to the schools at Assiniboine, this week we did some research on Black... END_OF_DOCUMENT_TOKEN_TO_BE_REPLACED