Many paths lead to agriculture

Weeding, mowing, tending to irrigation systems, pruning and monitoring various research initiatives such as an onion rot effort, both students say that this summer job has added to their overall education and appreciation of the natural world.

One of their more offbeat tasks is “weeding the weeds,” the task of keeping select weeds free of other weeds not being studied, and taking pictures to monitor weed growth as part of research projects.

For Salemon, whose career aspirations are, as her program’s name implies, in “land and water management” either in agriculture or conservation districts, the connection between this summer’s work and her future career is fairly straightforward.

The career options “vary so much,” she said, adding that there’s GPS work, assessments, aquatics.

It’s so broad, I haven’t even narrowed it down yet.

While not as obvious, there are also connections between this summer’s employment and a future career for Truthwaite.

“We’re actually growing a lot of the things we’re using in MICA (Manitoba Institute of Culinary Arts), so that’s kind of nice,” she said during a brief break from weeding alongside Salemon on a particularly hot summer day. “We have our own garden; MICA has their own section of garden, so we’re growing all our own squashes and pumpkins and cucumbers and what-not that we’re using in the fall.

“It’s good to know where our food’s coming from, and it gives an appreciation of where your food comes from, so you appreciate more and there’s less waste, I think.”

Truthwaite, who just finished her first year of studies, relocated to Brandon from the Interlake community of Fisher Branch to benefit from Assiniboine’s small class sizes, which offer a more hands-on learning environment. Upon graduation she plans on heading back north to find employment at a hunting and fishing camp.

“I love being outdoors, so I’m kind of getting the best of both worlds,” she said.

Salemon, who also just finished her first year of studies, said that she has learned so much in her time as a horticulture assistant so far that it’s difficult to rattle off a list of lessons.

“I’ve learned the different stages of the weed and how they look, and IPM — integrative plant management, and irrigation systems — different leaf/plant diseases,” she said.

“The best part of being in the field for me has been how I’ve been blown away by soil chemistry and the symbiotic nature of everything… The more I learn; it’s just nature is jaw-droppingly complicated and I love it.”

The two students with very different professional aspirations were quick to bond over their shared interest in the natural world, with their time together flying by so far.

“I haven’t stopped talking for five minutes since I started,” Truthwaite said. 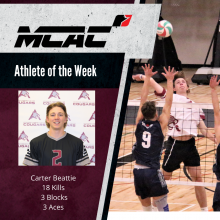 In a back-and-forth contest, the Assiniboine Community College Cougars (ACC) Cougars prevailed in a thrilling five set match to complete the first half of the 2021-22 Manitoba Colleges Athletic... END_OF_DOCUMENT_TOKEN_TO_BE_REPLACED

They say charity begins at home. That’s certainly the case when it comes to Assiniboine Community College staff. On this Giving Tuesday, Assiniboine is celebrating the generosity of their staff in... END_OF_DOCUMENT_TOKEN_TO_BE_REPLACED