Throughout the month of June as part of National Indigenous History Month we will be honouring the accomplishments and contributions of historical Indigenous Canadians, this week we did some research on Peguis, Saulteaux (Anishinaabe/Ojibwe) Chief.

Chief Peguis was born near Sault Ste Marie, Ont in 1774 and was a prominent leader of his own people, and became famous for his role in aiding the Selkirk settlers. Upon their arrival at Red River in 1812, he defended them, showed them how to subsist from the country, and later assisted the survivors after the Seven Oaks Incident.

Chief Pequis supported the Hudson's Bay Company in its bitter rivalry with the North West Company. In 1817 he signed a treaty with Lord Selkirk ceding lands along the Red and Assiniboine rivers for settlement.

Peguis and his wife were baptized by Anglican missionaries in 1840 and took the names William and Victoria King, their children adopting the name of Prince. In association with the Reverend William Cockran he helped to establish an agricultural settlement among the Saulteaux at St. Peter's, Dynevor—the first Anglican mission of its kind in the West.

For thirty years Chief Peguis was spokesman for his people against the misuse of Indian lands and was an ardent defender of Native rights until his death in 1864.

My name is Tricia Ciglar, and I’m from Winnipeg, MB. I’ve worked in finance as an accountant for over 25 years. In 2017, I was at a point in my career where sitting at a desk all day was getting... END_OF_DOCUMENT_TOKEN_TO_BE_REPLACED

The Cougars Women’s Volleyball program have signed Portage La Prairie local, Jayda Moffat, for the 2021-22 season. Moffat, a 5’7’’ setter who took a year off after graduating from Portage Collegiate... END_OF_DOCUMENT_TOKEN_TO_BE_REPLACED 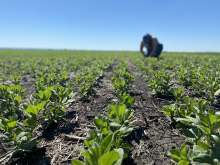 The Collaboration Zone within the Prairie Innovation Centre for Sustainable Agriculture welcomes a new industry sponsor—the Manitoba Pulse & Soybean Growers (MPSG), who have committed $200,000 to this... END_OF_DOCUMENT_TOKEN_TO_BE_REPLACED