My name is Simone Turner-Cummer, and I grew up in Carman, MB. I’m currently enrolled in the Business program at Assiniboine, and I’m a veteran player on the Assiniboine Cougars women’s hockey team.

I grew up playing male and female hockey. I finished high school and minor hockey playing on a boy’s hockey team, the Carman Cougars. Early on I played forward, but now I play both forward and defense, whatever our team needs.

After high school, I tried out for a junior team in Winnipeg, which is where I first started playing defense. This led me to the Assiniboine Cougars. I was asked by the Cougars’ coaches to join the team to play provincials and Westerns in Red Deer, Alberta. That was my experience with Assiniboine and the hockey team. I had played against them before but that was my first time playing on the team. I’ve been with the program here at Assiniboine ever since.

The Assiniboine Cougars and the hockey program has seen so much growth and transition over the years. As a veteran to the program, it’s amazing to see the strides and progress we’ve made. With the amount of success we’ve had, and the effort that goes into recruitment, it’s only going to get better. If you love hockey, it’s a great program to be a part of. We might not be a big school, but we compete just as well as anyone, even better than most. Larry Shannon is a big reason for my success here at Assiniboine as a player and a person. He goes above and beyond for us as players, and he’s been a big part of the team and the overall experience. Coach Tony is one of the best coaches I’ve ever had. He’s very knowledgeable and such a great coach; he’s very passionate about what he does.

Our team has a great dynamic. Winning Nationals in Dallas has been the highlight of my hockey career so far. The atmosphere of that tournament, and the work we put in leading up to it, was something special. To not only get the tying goal in the semi-finals, but also the game-winning goal was something I’ll never forget.

Afterwards, heading into the finals against Minot University and finally beating them after losing to them six times previously felt really special. Coach Tony always remained optimistic and didn’t let prior losses get in our heads. I remember being on the bus after we lost to them the week before Nationals. Tony told us to wipe that from our slate and reminded us that we only needed to beat them once; all those other games up to that point didn’t matter. It was unreal to finally beat them, especially in the finals. It was a great weekend. 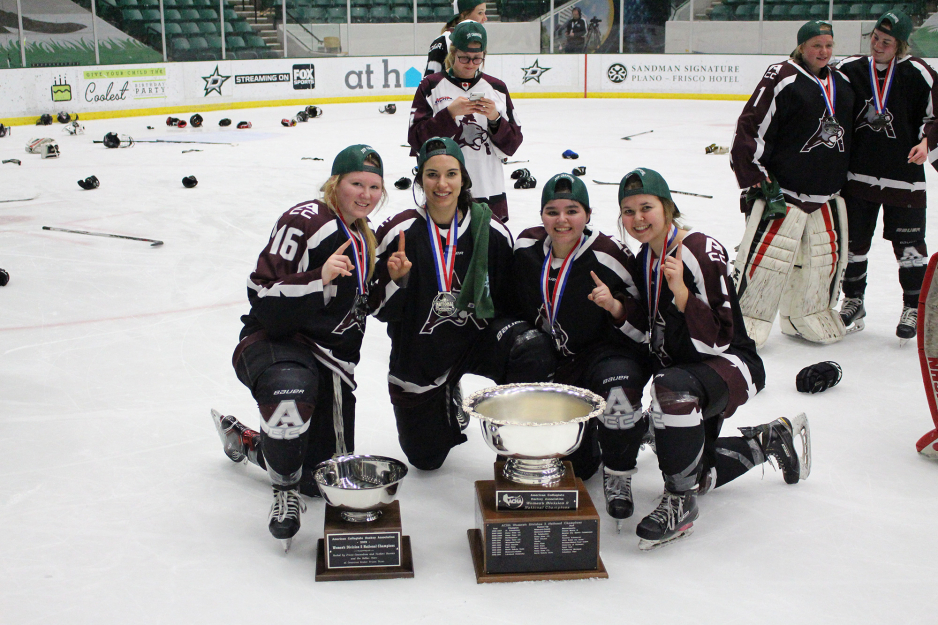 It’s sad we weren’t able to defend our title with the cancelations, especially coming off our unbelievable season going 31-0-0. Obviously, with the pandemic, it hasn’t gone completely as planned. Having to do remote learning is a little different, but the instructors have been great at adapting during this time.

I’d love to be able to stick with the team after I’m done playing. Whether that be helping as a coach or in another role. I’ve coached other teams in the past, including a national Indigenous soccer team. I’ve enjoyed that part of being on a team, as well as my time playing.

I’m most proud of the success I’ve been able to be a part of since starting to play at the college. To look up at those banners in the gym and know I was a part of every battle it took to win them is a surreal feeling. I can’t help but smile when I look back.

Lichelle Martens becomes the most recent addition to the Cougar Women’s Soccer 2021 roster. Committing to the Cougars was an easy decision for Martens as her good friend and long time teammate, Megan... END_OF_DOCUMENT_TOKEN_TO_BE_REPLACED

Katherine Nerio Martinez is the most recent recruit to commit to the Cougars’ women’s soccer team for 2021. She watched a close family friend, Cougars alumni Tatiana Lopez Beltran play for the Cougars... END_OF_DOCUMENT_TOKEN_TO_BE_REPLACED