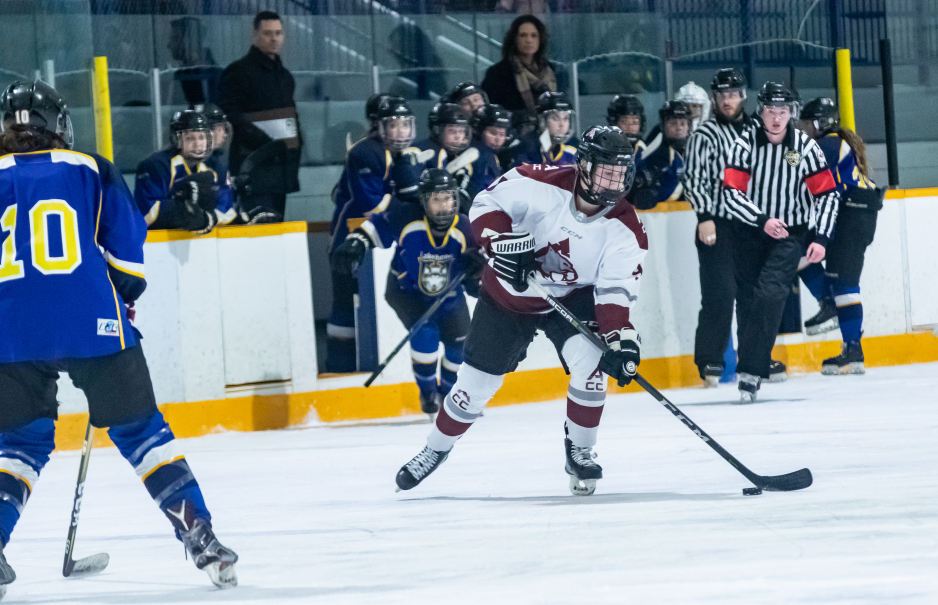 The Women's Top Forward is awarded to Sadie Wood, who scored 23 goals and had 25 assists across the season. Rivers local, Sadie, was the leading goal scorer for the team, second in the Western Conference and ninth overall in the ACHA Division 2. While balancing her impressive commitment to honing her craft on the ice, Sadie is also studying Assiniboine's Social Service Worker program.

"Sadie surpassed our expectations of being a power forward. Her work ethic at practice, on game days, and dryland training was second to none," said Coach Bertone.

The Women's Top Defensive player is awarded to two players this year, Haylee Anderson and Mariah McCue. Fellow Rivers local, number 16, Haylee Anderson capped off her third and final year as a Cougar with a spectacular season. Fulfilling the role of Assistant Captain for the last two years, Haylee was a standout player whose versatility across the ice proved to be reliable. Haylee finished the season with eight goals and nine assists to claim 17 points across the season.

"Haylee has a no-quit attitude and plays a full 60 minute every game. Her ability to jump into the play gave us another scoring threat — her cannon from the point causing havoc for opponents’ goaltending," said Coach Bertone.

Dual Women's Top Defensive player Captain Mariah McCue cements her incredible tenure with the Cougars, after being selected as an ACHA 2019-2020 Academic All American, captaining the Team to their first Championship in the 2018-19 season and first undefeated season. Known for her vocal direction on and off the ice, Mariah finished the season with three goals and 20 assists to claim 23 points throughout the season.

"She was team captain for the past two years and was truly a person that cared for the team. She guided the players to become a family. Mariah wants to win and that is evident in-game with her defence play," said Coach Bertone.

The Coaches’ Choice award goes to forward athlete Jasmin Denby. Jassy to her teammates, played a crucial role in transitional plays while also always giving 100% no matter the situation. Transferring her dedication to the classroom, Jasmin is currently undertaking Assiniboine's Business Administration program. Jasmin scored 17 goals and provided 18 assists to take home 35 points across the season, and will be back for a third year with the Cougars.

"Jassy is a favourite with teammates, coaches and fans. She brings an ability to think the game through and creates plays that make fans gasp. Her positive attitude and enthusiasm reflect her love for the game," said Coach Bertone.

The Women's Hockey Most Improved is awarded to forward Sydney Cancilla. In her first year with the Cougars, Sydney had a point per game with nine goals and eight assists for 17 points in 17 games while balancing her studies in Assiniboine’s Business Administration program.

"Sydney can adapt to whatever game her opponent wants to play, be it a physical game or finesse game. She has the talent to make highlight-reel goals with her quick release, and a snapshot that some would say is as hard as a slap shot. Sydney is also a team favourite and is very good at keeping the dressing room relaxed," said Coach Bertone.

New online programs and courses from Continuing Studies at Assiniboine are meeting learners at home where and when they can get the most from their experience. These online learning opportunities, in... END_OF_DOCUMENT_TOKEN_TO_BE_REPLACED

The  past  two months have presented  evolving  uncertainty for individuals and families around the world as a result of the COVID-19 pandemic. At Assiniboine, one of our  earliest  priorities was... END_OF_DOCUMENT_TOKEN_TO_BE_REPLACED