The Prairie Innovation Centre for Sustainable Agriculture is Assiniboine’s vision for the future of agriculture training and a Manitoba-made response to labour market gaps in the industry.

Assiniboine Community College has offered agriculture programming for the past several decades, and a renewed focus has the college investing even bigger in agriculture. Applied research, program alignment to industry needs and the introduction of the Prairie Innovation Centre will contribute to the college’s plan for enrolment in ag programs to nearly triple over the coming years.

The Prairie Innovation Centre is the cornerstone of the future in agriculture-related training at the college. This $65 million capital project includes a $15 million fundraising campaign. Since the campaign launched with a a $1 million donation from Sunrise Credit Union in fall 2020, the Centre has received close to $10 million in commitments—a number that continues to grow.

“Together with Assiniboine, we share a commitment to making our community a better place to live and learn, and at Wawanesa Insurance, we know all of the Westman region will benefit from the new Centre,” said Kevin Bailey, Regional Vice President – Central Region, Wawanesa Insurance. The college announced Wawanesa’s $100,000 contribution to the project in spring 2021.

This one-of-a-kind Canadian college project will bring together collaborative learning spaces, applied research labs and multipurpose spaces that will serve both industry and the college community.

“The Prairie Innovation Centre will not only address the current and developing gaps in the labour market in Manitoba agriculture, it will also be a hub for agricultural innovation, encouraging engagement and collaboration with industry partners to address emerging situations and issues,” said Derrick Turner, Director of Advancement and External Relations at Assiniboine.

“The college looks forward to building upon the relationships we have with partners while creating a meaningful impact on the future of agriculture.”

A key motivator behind the need for the Centre is a growing gap in the agriculture labour market. In Manitoba, it’s projected that one in five agriculture jobs will go unfilled by 2029.

“Human resources are the most difficult piece, but also the backbone of a business like mine,” said Bob Mazer, president and CEO of Mazergroup, who is also an honorary co-chair of the Prairie Innovation Centre campaign. Mazergroup has committed $500,000 to the project.

“Most Mazergoup employees have some link to Assiniboine, and that’s a big reason why we decided to contribute to the Prairie Innovation Centre project. Dozens of our staff have made better lives for themselves and their families because of the training and education they received at Assiniboine.”

And that’s really the purpose of the Centreto ensure both students and the agriculture industry are set for success.

“Our college has a critical role in ensuring there are people trained and ready to step into careers in the growing agriculture sector,” said Mark Frison, president of Assiniboine. “The Prairie Innovation Centre will answer the call, arming agriculture in Manitoba with a skilled labour force.”

The Centre, which aims to expand seats in agriculture-related programming from 300 to more than 800, will repurpose the Valleyview Building on the North Hill campus.

“I think it’s a great expansion, and it makes sense for the Westman area. Increasing local graduates in agriculture programs, that’s great for everyone, not just our business,” said Ron Helwer, president of Shur Gro Farm Services. “When majority of grads get jobs and stay in the province, that’s important.”

Helwer, who is an honorary co-chair and donated $500,000 to the project, is referencing Assiniboine’s 2021 graduate survey that revealed 92 per cent of Assiniboine graduates were employed after nine months and 93 per cent stayed in Manitoba.

By creating an enhanced agricultural training capacity, the Centre will enable the agriculture sector to reach its full potential as an economic driver in the Canadian and Manitoban economy.

The Prairie Innovation Centre is Assiniboine’s natural next step as a national leader in agricultural training.

The college is grateful for all the support it has received toward the Prairie Innovation Centre to date.

Visit assiniboine.net/pic-donors where all industry partners will be updated as announced.

Assiniboine Community College has named a student space in the Len Evans Centre for Trades and Technology at the college’s North Hill campus, “Mazergroup Main Street”, to honour a $500,000 donation... END_OF_DOCUMENT_TOKEN_TO_BE_REPLACED

Assiniboine Community College is offering the Early Childhood Education (ECE) Workplace program in two new locations in early 2023. The diploma program is intended for those who are currently employed... END_OF_DOCUMENT_TOKEN_TO_BE_REPLACED 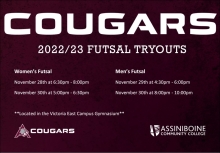 Cougars Athletics will be hosting Futsal open tryouts You must be a full-time student at Assiniboine to play for the Cougars. Assiniboine provides travel, meals, accommodations and clothing to our... END_OF_DOCUMENT_TOKEN_TO_BE_REPLACED